When Irish Eyes are Crossed 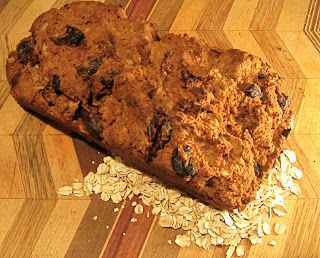 In honor of St. Patrick’s Day, I made Irish soda bread. Sort of.

When I went from vegetarian from vegan some years back, what I missed and thought of wistfully were the big overstuffed omelets I used to make on Sundays and my Irish soda bread, which I made all the time. I'd adapted my recipe from Myrtle Allen, maven of County Cork's famed Ballymaloe House, who seemed both amused and exasperated by this untraditional American girl trying to translate an Irish tradition. I had to mess with the recipe quite a bit to get it to taste as earthy here as it is there, but when I had it, man, I had it. Oaty, grainy, it's honest and nourishing and was the one thing I knew I could do well. It was also full of yogurt and butter. So when I went vegan, I said good-bye.

Then recently it occured to me I could try baking a vegan version, because I have just made my peace with vegan margarine. I use it but rarely, and only in baking. Not all baked goods can be fudged by swapping butter for apple sauce and coconut oil. Coconut oil soda bread? Yetch. And yet here I am using almond milk and vegan marg, so perhaps in a few months, I’ll present you with a soda bread recipe by way of the tropics. My classic soda bread appears back in June of last year -- on Bloomsday, June 16 -- but here’s a lightly sweet one with fruit. I added chopped dried figs, yet another heterodox twist. If you want to stay more faithful to the true, use raisins.

If you think I'm heretical here, wait till you see what I do with greens and white beans, which skew not towards Italy but Morocco. Unconventional but majorly yummy. Coming up next -- unless I do the cabbage and boobs post first. So much to do.

In a large bowl, combine spelt flour, oatmeal, wheat germ and baking soda. Work in vegan margarine until mixture forms crumbs. Mix in cinnamon and sugar and almond milk. When you have a nice, thick batter, stir in chopped figs or raisins.

Pour into a lightly oiled pie or loaf pan.

Bake for 30 minutes. Allow to cool before slicing, or bread may be crumbly. Even crumbly, it’s good.