Here's Looking At You, Kid 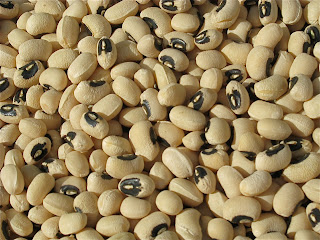 Call me a bit of a rebel, I’m not a big on holiday traditions. For obvious reasons, I’m fine with a turkeyless Thanksgiving. I’m likewise fine with a treeless Christmas, a menorahless Chanukah. I do like New Year’s though, with champagne on New Year’s Eve and hopping john New Year’s Day. There is nothing glamorous about a plate of hopping john -- it's rice, black-eyed peas and collards. It’s cheapish to make and plainish to eat, but I love it for being rich in fiber, folklore and mystique. What other dish promises good luck, fortune and romance?

Some say black-eyed peas look like coins and collards or other greens represent paper money, therefore you’ll make as much money as the hopping john you eat.

Black-eyed peas also fit an old superstition that if a dark-eyed man is your first visitor on New Year’s Day, love and good luck will be yours.

Who knows where such stories started? One version has hopping john originating with the slaves who brought black-eyed peas and rice from west Africa. Some say the dish got its name from a child dancing around the stove, eager for supper. What started as a slave dish, livened with a lttle pepper and pork made its way into plantation kitchens.

It could be hopping john got its start even earlier, from our Celtic forebears who lighted fires on New Year’s Eve and danced around them all night. The Anglo-Saxon word hoppan means religious dance.

In either case, dancing seems as much a part of hopping john as black-eyed peas. I'm a great believer in dancing and a big fan of good luck, great fortune and hot romance. Do I believe a plate of rice and beans will make that happen? Not so much, but just enough -- that's why I’ll start the year the way I have for the past decade, with a pot of hopping john ready for New Year’s Day. Call it the victory of hop over experience (sorry).

Traditionally, hopping john is made with everything going into one pot. Traditionally, it is also made with pork. I -- surprise -- have broken with tradition and make this in two pots and sans pig.

Make it New Year’s Eve or even the day before. Flavor improves over time and hopping john reheats like a dream. You’ll have a nourishing, cheap meal ready to go on a day when some of us are too tired and bleary-eyed to cook. And there’s a bonus -- the sturdy rice and beans dish sops up any hangover.

In a large pot, bring 3 cups of water to boil over high heat. Add black-eyed peas, 2 cloves of garlic (whole), pepper and bay leaf. Skim off any beans that float. They’re duds.

Reduce heat to low. Simmer beans uncovered for an hour and a half until beans are tender, not mushy.

Add brown rice and the vegetable broth. Cover and simmer over low heat for 20 minutes. Don’t lift that lid. Turn off the heat, leave pot on the burner and let hopping john sit.

Meanwhile, heat olive oil in a large skillet over medium-high heat. Add onion, jalapeno, celery and the remaining 4 garlic cloves, chopped. Saute for about 5 minutes, stirring, until the vegetables soften.

Reduce heat to medium. Add greens by the handful, and cook until wilted, stirring occasionally, about 10 minutes.

Fluff rice and beans, fold in collard mixture. Squeeze in lemon juice and season with salt and pepper. Splash with hot sauce.