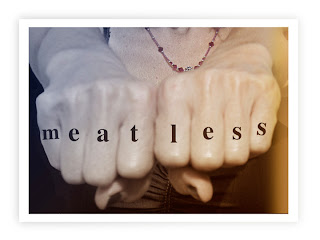 Those of my ilk were once considered Pythagoreans, as in Pythagorus. Best known as ancient Greece’s math geek extraordinaire, Pythagorus was also into music and philosophy. It’s believed his own personal ethos abjured killing and eating animals, a practice followed by vegetarians for generations to come.

The word vegetarian itself had to wait until the mid-1800s for someone to come up with it. The term vegan wasn’t coined until 1944. More commonly, though, if you didn’t eat meat, you were just weird. Or a weirdo hippie freak. Or a tree-hugger. The term herbivore never caught on, not the way omnivore has. Of course there’s variations of omnivore, too. You can be flexitarian, which basically means you’re vegetarian when the mood strikes you. You can be fishaterian (okay, I came up with that one -- my own wry terminology for those who don’t eat meat but do eat fish) and less-meatarian (that one comes from the estimable Mark Bittman, Food Matters Cookbook author and all- around great less-meatarian guy). Meat-eater, though popular, sounds barbaric and a little too like Harry Potter’s Death Eaters.

There’s so many ways we explain how we eat, French gastronome Brillat-Savarin (“Tell me what you eat and I will tell you what you are,”) would never have believed it.

Lately, I’ve even been thinking about what I call myself. Being the Edgy Veggie suits me. I’m edgy by nature, especially when I write about food -- a cheeky part of me comes out. Sometimes I think my wonderful editor at the Miami Herald just wanted to throw the paper’s meatless readers a (meatless) bone. What she got is someone who’s come to see how food -- Pythagorean or otherwise -- connects us to the planet, to our community, to the past, to each other, and has ramifications in politics, environment, nutrition, education and more.

The term veggie, though, is quaint, especially compared to the newer, more assertive term meatless (or as Brillat-Savarin would put it, sans viande). I would never have anticipated the success of in-your-face Skinny Bitch. (which is perhaps, alas, why I’ve struggled with publishing). Nor would I have guessed the likes of Bill Clinton and Oprah would get on the vegan bandwagon (Oprah, good on you for trying. Bill, stick with it, honey -- you look terrific). When I was the lone vegan in my teens, I never dreamed there’d be a Meatless Monday movement, let alone that it would gain traction. It does my vegan heart good.

Call us Pythagoreans, call us meatless, the only difference is spin. I hope I’ll always be the Edgy Veggie. But perhaps if I were starting out now, I’d be even edgier. I’d be the Meatless Marauder. With a mask and cape. And vegan superpowers.

The classic rice dish requires no superpowers, vegan or otherwise, just the time you spend stirring at the stove. Having friends in the kitchen and/or a glass of wine makes the time go faster.

1 cup rice -- Arborio is the risotto rice of choice, but really, any rice will work

Over medium heat, bring white wine to simmer in a medium saucepan. Add dried mushrooms. Turn off heat and let mushrooms infuse the wine for half an hour.

Add sliced mushrooms and continue cooking for another 5 minutes, or until mushrooms become tender. Stir occasionally.

Add the rice and stir, coating each grain with oil Keep stirring another few minutes, until rice looks luminous.

Chop the wine-infused mushrooms. Add to the rice, along with the warmed wine.

Pour the vegetable stock or water into the medium saucepan and heat over medium-high heat. When stock reaches simmer, reduce heat to low but keep on burner.

Meanwhile, stir the rice until it absorbs the wine.

Add warmed stock to rice a ladleful (or 1/2 cup) at a time, stirring constantly. It’ll take about half an hour to work in all the liquid, by which time the rice will have turned creamy and luscious from slow cooking.