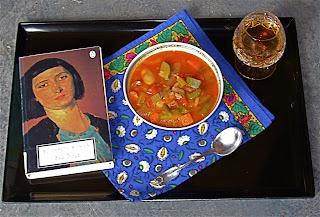 Years ago, I put my husband through grad school. He took night classes, I worked days, we basically didn’t see each other for two years. We had no money. I got by by reading a lot of bleak British post-war novels where the heroine wears tatty sweaters because she’s always cold. She doesn’t have enough shillings for the gas meter in her bedsit so she’s always cupping her hands around a chipped mug of tea for warmth. You’d think this wouldn’t translate in 80-degree Miami, but you’d be wrong.

To save money, I usually brought my lunch to work, but I’ll be damned if I remember what I ate. My big thrill was once a week, usually Friday -- I’d take my post-war novel and go out for lunch. I had a five dollar budget. This obviously limited my options. My treat of treats was to go to a place hopelessly outmoded at the time -- the Biscayne Cafeteria.

It was the cafeteria that time forgot, with a dim interior, formica tables, buzzing fluorescent lights, ancient carpet of indeterminate color, and of course your plastic trays and chrome cafeteria track. Most of the patrons were ancient, too, except for a few young gays, who came for reasons I could never fathom. Perhaps they were hard-up like me. For five bucks, I could get a cup of vegetable soup, a slice of zucchini bread and a cup of tea, by which we do not mean Earl Grey. But I’d open up my library copy of Henry Green or Elizabeth Bowen or Muriel Spark and it was a feast.

The real uneasy-making bit was the wait staff -- aging black men and women in burgundy uniforms of a synthetic fabric that could not have been comfortable. You paid the cashier for your meal and they would take your tray and bring it to your table. This seemed 40 kinds of crazy to me, not to mention demeaning. But when I tried to take my own tray, all hell broke loose. So to keep the peace (and my affordable soup and zucchini bread), I handed over my tray, tipped them when they brought it, and since I went every week or so, got to know the different folks and say hello to them.

I formed a particular bond with a stately waiter named Cyril, who came to look out for me. He’d bring me an extra mug of hot water, so I could stretch my tea bag to make two cups of tea. This was pretty great. Other the months, Cyril told me about his late wife Emma, his three kids, nine grandchildren, his sciatica, the numbers he played in the lottery. I told him about my job, my family.

One particular week, he set my tray down and asked how I was, said he could see something was troubling me. Well, my husband’s beloved grandmother had just died and now my grandmother, with whom I was close, was in a coma and heading the same way. And though I had no intention of telling Cyril, it all came tumbling out, along with some tears.

Cyril nodded. I can’t remember for sure if he produced a tissue, but let’s say he did.

“D’you know what I do when I’m going through a hard time?” he asked. He was such a good man, so decent. He probably prayed. Or counted his blessings. Or maybe went for a walk in the park or played with his grandchildren.

Turns out Cyril had a fondness for cheap brandy and usually picked up a bottle on his way home. This was not the answer I expected. It’s really not what I’d recommend for him or for anyone. But hey, it worked for him. Hard times are hard times, and be it brandy or books, soup or scotch, I hope you find whatever it takes to see you through.

This soup is a far cry from cafeteria vegetable soup. It’s rich with fresh vegetables and heady with saffron (thus costing more than cafeteria soup), a lightened up version of the French soupe au pistou. Make and enjoy it in hard times and in happy ones.

In loving memory of Felicia Smith, who asked for the recipe.

Vegetable Soup With a French Accent

1 pound tomatoes, chopped (or 1 15-ounce can of diced tomatoes)

Heat oil in a large soup pot over medium-high heat. Add chopped garlic and onion and stir until vegetables soften, about 5 minutes. Add carrots, mushrooms, leek, celery, green beans and zucchini. Bring to boil. Stir in tomatoes, tomato paste, wine and saffron. Add orzo. Cover, reduce heat to low and simmer until flavors blend and all vegetables and orzo are tender, about 30 minutes.

* Leeks are lovely, but they’re dirt hogs -- all kinds of grit and such lurk in their multiple layers. A gritty leek is an unhappy-making experience. Best way to wash a leak is to cut it lengthwise, so you have two half-cylinders. Then slice and fan out the layers. Soak in salt water for a few minutes, then rinse a few times until water runs clean.